The Debt - Part Three on its way 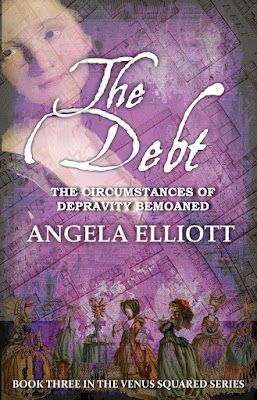 Part Three of the Venus Squared series is on its way.

Here's a snippet from the first couple of pages, to whet your appetite.

The Debt, the circumstances of depravity bemoaned by Angela Elliott


Spring came hard on the heels of a bitter winter. Covent Garden, ever bustling with commerce, progressed from ice clad to mud-drenched thoroughfare: the cobbles treacherous, the air fogged with noxious poisons. Sundry persons of a rakish disposition trailed dirt through our hallways, thinking nothing of the mess they made, or the season’s damp diseases. Catching a cold though, was the least of our problems, for that winter Lucy Mead acquired the French pox and was forced to leave our house and find habitation in the lowest of the Seven Dials’ kennels.

Although I gave her money for the cure, I think she spent most of it on Madame Geneva. We all live with the dread of this syphilitic plague. In Lucy, it raged fierce and laid her low with ulcerations, such that no man wished to keep her company. Eventually, she could earn not a crust. One morning she walked out and I did not see her again until she appeared on the steps of the milliner’s shop in James Street. Poor Lucy had a hole in her temple and was quite dead.

I should explain: that morning I sent the maid out for pastries, but scarce had she time to turn the corner and fix her eyes on the bakery, than she spied the bloody remains, weighed up the situation and returned home, empty-handed, but with a story of foul murder, full on her lips.
“You must go see, Mistress Ives, for it’s none other than our own Lucy,” said a breathless Christie. “James Street is blocked by on-lookers, even though the constable’s there and calling for the Bow Street Runners and a Magistrate.”

I did not wait for further elucidation; I simply took up my shawl, flung it around my shoulders and strode out to discover what had become of the late Lucy Mead.