What's a child to do when they are friendless, but read?

At least, that's what I did when I was a child. I have no idea what lonely children do now, probably play computer games.

My family moved home several times, from one end of the country to the other. I was shy and did not enjoy my time at school. I was bullied. I had National Health glasses and sticky out teeth. Later I had braces to correct my bite. I was sad and lonely. I found respite in books. They became my friends. They offered other worlds into which I could disappear. I read voraciously. 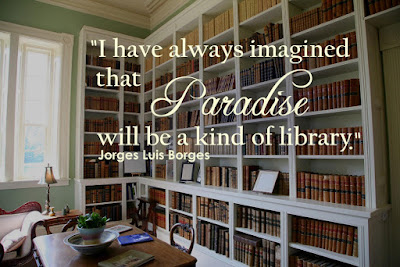 Muffin the Mule was a favoured TV programme of mine. It is not a show that Americans will recognise, but here in the UK, you could also buy a book. This came with a map of the garden where Muffin lived. I practically wore that book out.

Later The Hobbit became a much read favourite. It too, had a map. I like maps. They help a reader understand the geography of the story. They also enable a reader with imagination to create stories of their own, within the land that the characters occupy. I didn't get into Lord of the Rings until I was a teenager. Once I did, I was smitten.

I have to say though, for a young girl, growing up in the sixties, the books that occupied most of my time were the Chalet School series by Elinor Brent-Dyer, My Friend Flicka by Mary O'Hara and Enid Blyton's Famous Five.

Michael Moorcock's books then completely took over my world as a young teenager, as did those by a variety of SciFi authors. At school however, I was forced to read Jane Austen and Shakespeare. By now we were living just outside Stratford on Avon and I was going to school over the road from Anne Hathaway's cottage in Shottery.  My mother gave me Cranford by Mrs Gaskell, in an effort to encourage a love of the classics.

As I grew up SciFi gave way to American authors such as Eudora Welty and Henry James, albeit that he spent most of his life in Britain. I also became partial to Kurt Vonnegut, Jim Thompson, Raymond Chandler, Dashiell Hammett, and John Steinbeck.

In my fifites now, I have come back to those books I discarded as a teenager - the classics by the Brontes, Austen, Gaskell etc... I am enamoured of the gothic writers, Bram Stoker, Mary Shelley and Lord Byron.

Yes, for a lonely child, books open up worlds and offer friends by the bucket load. As an adult, they continue to deliver satisfying escapism from the drudgery of everyday life.

I am a reader and now, writer. Friends are, more often than not, books.