When a character has a past - Kitty's (and my) family background 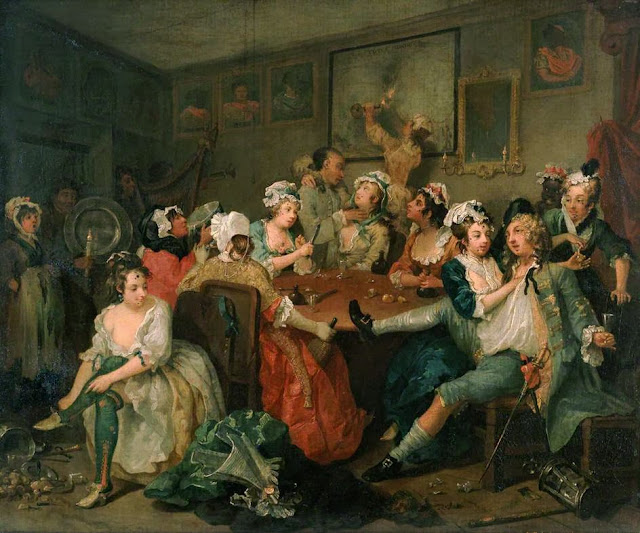 But she didn't always frequent such low dives and keep such rakish company. Once upon a time she lived in Norfolk with her parents and sisters. Her father's death brings her to London to take up a position in a household, but she is waylaid by Mother Shadbolt and promised lavish clothes and a lifestyle to match. Kitty is young and foolish and so she goes with Mother Shadbolt, only to find herself financially indebted to the old bawd and unable to leave.

Hogarth, very kindly, illustrated this scene too, in his series, A Harlot's Progress. 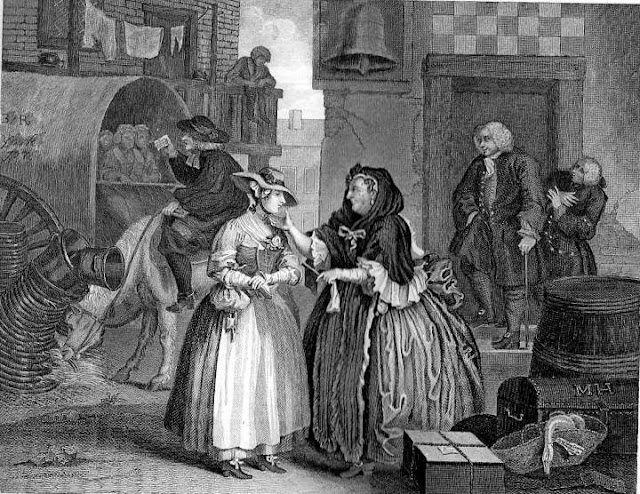 All this makes for a great back story for our Kitty Ives, but, is she really just a character? Or is there some basis in reality?

When I began to flesh out the idea for The Finish I needed a name for my main character and decided there and then I would raid my family tree. I've been an avid family genealogist since I was eleven. My grandfather, a man called George Leslie Mumby, told me about his grandfather, whose name was John Ives Mumby. John Ives Mumby had been married to a woman called Sophia Carden. At first, I thought I would call my main character Sophia, but I'd just written another story, The Remaining Voice (which is now undergoing something of a rewrite) and I didn't want to confuse the issue by using the same name twice. My cat is called Kitty Lala (she is something of a tart) - and one of the most famous prostitutes of the 18th century was also called Kitty - Kitty Fisher. It seemed appropriate then, that I named my whore Kitty Ives.

But there's more to it than just using family names. My grandfather, who was born in 1902 and has been dead for some years now, told me that his grandfather, John Ives Mumby was so named because he had lived in St. Ives in Huntingdonshire. For a long time, I had no evidence to the contrary, until I started to investigate through the records. When I did, I found that John Ives Mumby was born in 1815 in Newark upon Trent, Nottinghamshire, to another John Ives Mumby. The aforementioned Sophia Carden was born in 1832, so there was quite a gap in their ages. In fact, Sophia survived until the 20th century, whereas her husband died in his mid 60s, leaving her a widow with seven children.

Anyway, that there were two John Ives Mumbys intrigued me. Plus, Newark upon Trent isn't anywhere near St. Ives in Huntingdonshire. Upon further investigation I found that the first John Ives Mumby's father was a Joseph Mumby, born in 1757 in Lincolnshire. In 1781 Joseph married a woman called Anne White. At this point the trail went cold. I couldn't find a record of Joseph's birth. Instead, I looked at Anne White's parents, thinking this might take me back further. They were Samuel White and Mary Ives. Ahah! The Ives name. Far from being named after a place, the first John to be given Ives as a middle name was the grandson of Mary Ives. She, it turns out was quite a character.

Samuel, her husband died fairly young, and Mary only had one child. At a time when women could only come into money if they were widowed and had no sons, Mary was in a unique position. I found her will in the Nottingham University archives. She was a fairly well to do woman. She never remarried and so she kept all the money. She made her grandson, the first John Ives Mumby, executor to her will. He ran his own business in Nottingham as a fabric dyer. She left money to her daughter Anne (John's mother) with the stipulation that Joseph (John's father) should never get his hands on it. Joseph had been a grocer Horncastle, Lincolnshire, but in later years was an Innkeeper in Wisbech, which is rather close to...

Joseph retired. Yes, he retired at a time when no one retired because no one had a pension and no one could afford to retire.  That means he had amassed enough to keep himself and his wife without working. Where did he retire to? Why St. Ives of course, where else?

My grandfather was incorrect about his grandfather being named after St. Ives, but he must have heard something about St. Ives and it stuck with him.

When my father read a little of The Finish, he said, 'oh, her name's Kitty Ives. We had Ives in our family'. He said it as if I hadn't written the book; as if someone else had done it. My Dad is 90 so, it's to be forgiven if he can't quite get his head around the concept of his daughter as a writer.

You can read all about Kitty's exploits in The Finish and in the subsequent volumes, The Surety, The Debt and The Trade. Collectively, they are called Venus Squared. 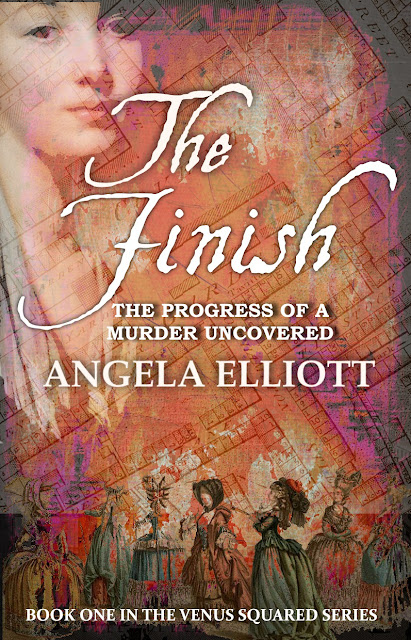