Way back in 2001 Marlon Brando appeared in The Score, his last film before he died.  The producer of this film was Bernie Williams, who passed away in December last year. It just so happened that, at the time of The Score, I was also working with Bernie on a sequel to his 1985 movie, The Bounty, with Mel Gibson and Anthony Hopkins. 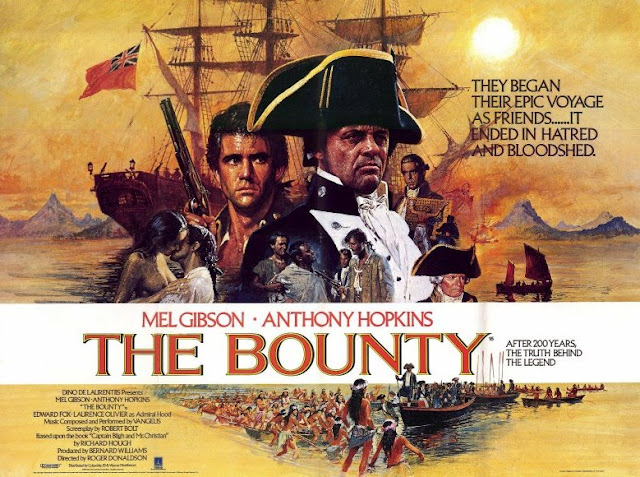 I should explain – In 1990 I heard of a proposal to cull a herd of wild bison in Canada because they supposedly carried brucellosis and TB, and it was being spread to cattle destined for the United States meat market.  I wrote a short piece about it, which was bought by the BBC World Service and went out at the time of the Gulf War. It bump-started my writing career, and from that point on I worked on documentaries in the UK. I was fortunate enough to have an actor friend, Stewart Bevan (who had been in Dr Who in the early 70s) and he introduced me to Norrie Maclaren at Tartan Television. Norrie had been Stanley Kubrick’s assistant on the film Barry Lyndon and I learned a lot from him about writing for TV and film. For the next few years we developed many projects together.

Move forward a few years and I meet a man called Stephen Walters. Stephen was a maritime consultant and colleague of film-maker David Lean, and had worked on Bernie Williams’ movie Bounty.  Stephen suggested I talk to Bernie about an idea we had to follow the story of the Bounty mutineers after they arrived on the island of Pitcairn. He gave me Bernie’s phone number in LA, and I called him. On the strength of that one phone call I found myself working with one of the all-time great producers. The Bounty was his passion. He had always intended on making a second movie, but the money ran out and Hollywood’s appetite for ‘ship films’ had shifted.

Bernie was making a film called The Score, with Edward Norton, Robert De Niro and Marlon Brando. Frank Oz was directing. Frank also having a bit of a nervous breakdown because Brando was being extraordinarily difficult and the script was unfinished. I heard stories about a scriptwriter being shipped in to write at a cost of $250,000 per week for six weeks and they still hated it. Eventually, Ed Norton stepped up and completed the writing and Bernie took over direction, though he was never credited for it. Half way through shooting Bernie gave my Bounty sequel to Marlon Brando and asked him to read it. Brando of course had played Fletcher Christian in the 1962 film of Mutiny on the Bounty. Fitting then, that he should pronounce on the newest offering.

Marlon loved it. He told Bernie, he should make it. It was a winner. Bernie talked to Anthony Hopkins, and he agreed to a cameo. The proposal went to studios in Hollywood. I expected to get very rich – well okay, not very rich. It was explained to me that as I was not a Writers Guild of America member, I would at best only be credited with the first draft script. Subsequent drafts would be written by a guild member.  In any case, it never happened. Hollywood still didn’t want a ‘ship film’. Even after Master and Commander came out, it still didn’t want to reprise Mutiny on the Bounty. My sequel entered ‘development hell’, which is where it has been ever since.

Sadly, Bernie Williams died in December 2014. Stephen Walters and I hoping to work on a couple of projects together, in Bernie's memory.

The Finish is Part one in the Venus Squared series, about an 18th century Covent Garden prostitute who is forced to solve a murder or swing from the gallows.